We decided to find out the gender this time just Alex and I and then we would still through a party for our friends telling them the gender.  It was a lot of fun! 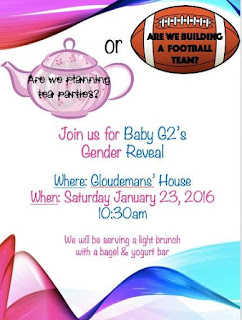 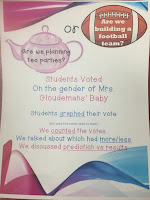 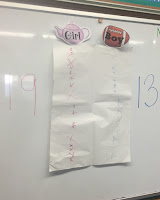 I started with my students.  I asked them if they thought baby was a boy or
girl.  We planned on using their data at the reveal.  I made sure to do this before the ultrasound so that I did not show any tell when they were guessing!  They guessed girl!

Tuesday we had our ultrasound.  It was so amazing to see our sweet, healthy baby! 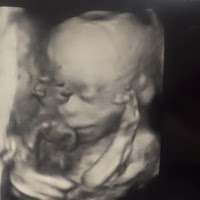 Next was making the volcano!  I made the volcano from an personal little milk.  I chose this because the opening was bigger than a water bottle and shorter than the vase I was going to use.

I then made the "lava." I mixed one box of baking soda (I have to do this 3 times: 1 at the party, 1 for my AM 4k, and 1 for my PM 4k so I need quite a bit.  Someone doing this once would need only 1 box.)  I put 1/2 a bottle of food coloring in the baking soda and stirred it it until there were no dark clumps.  I left in a ice cream container hidden in a closet in case someone visited to "dry out" over night.

I then made the volcano.  I made a batch of salt dough:
1 cup salt
1 cup water
2 cups flour
and stirred until dough like.  I the formed it around the milk bottle.  I had some left over so I rolled it out to make letters "Boy or Girl?"
I left that to dry overnight as well.

The morning of the party, I put the lava in with a paper funnel and put the top back on the milk container.  We are party ready! 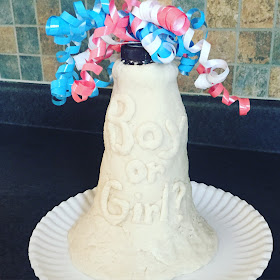 Party day we put the volcano out for display and had the vinegar on stand by.  We had everyone vote on their down on the vote tally based on the wives tales. 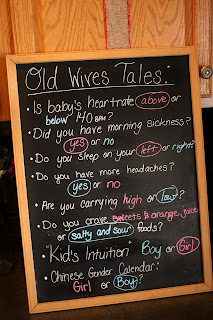 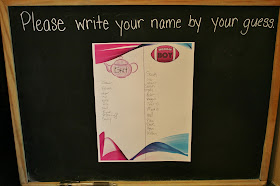 As soon as everyone was there, we got ready to to the volcano or I would explode with the knowledge! 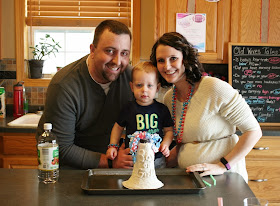 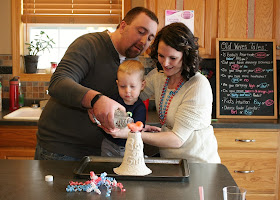 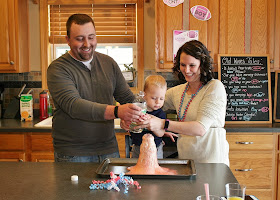 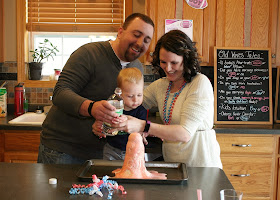 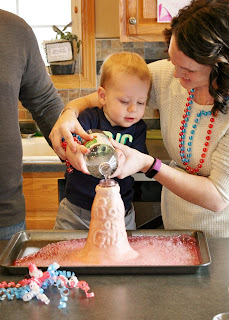